Graeme College has undergone a cricket revolution in recent years, that is directly linked to our relationship with Cricket South Africa as both a Focus School and a Blue Chip Status school. That relationship proudly continues to grow from strength to strength. CSA have assisted in the purchasing of new pitch rollers at Graeme in partnership with Protea Rollers, and continue to provide financial support, which is used to assist learners with tuition and boarding expenses. As a CSA Focus School we are proud to be recognised as one of the key schools within South Africa who are producing excellent cricketers of all race groups. The highlight of our development is without doubt that we are being recognised by CSA for the good work that we are doing which culminated in being awarded the Blue Chip Status in 2019. We are the only school in the whole province that currently has that status. Schools are measured against the Schools Quality Index (SQI); schools that achieve 90 percent on the SQI assessment are awarded the official CSA Blue Chip Status for that year. An annual assessment is done on all schools to monitor their progress against the Index and schools will be incentivised in various ways to encourage them to improve their score on the SQI. Greg Hayes and Niels Momberg have been massively instrumental in CSA’s support of Graeme College. Colin Gxowa on behalf of EP Cricket has also been a key supporter of our progress and role within South African cricket development. We are very open about our desire to be CSA’s proudest asset within the Focus School programme. So far, we have exceeded all expectations and are, without any doubt, a great ambassador for the programme. 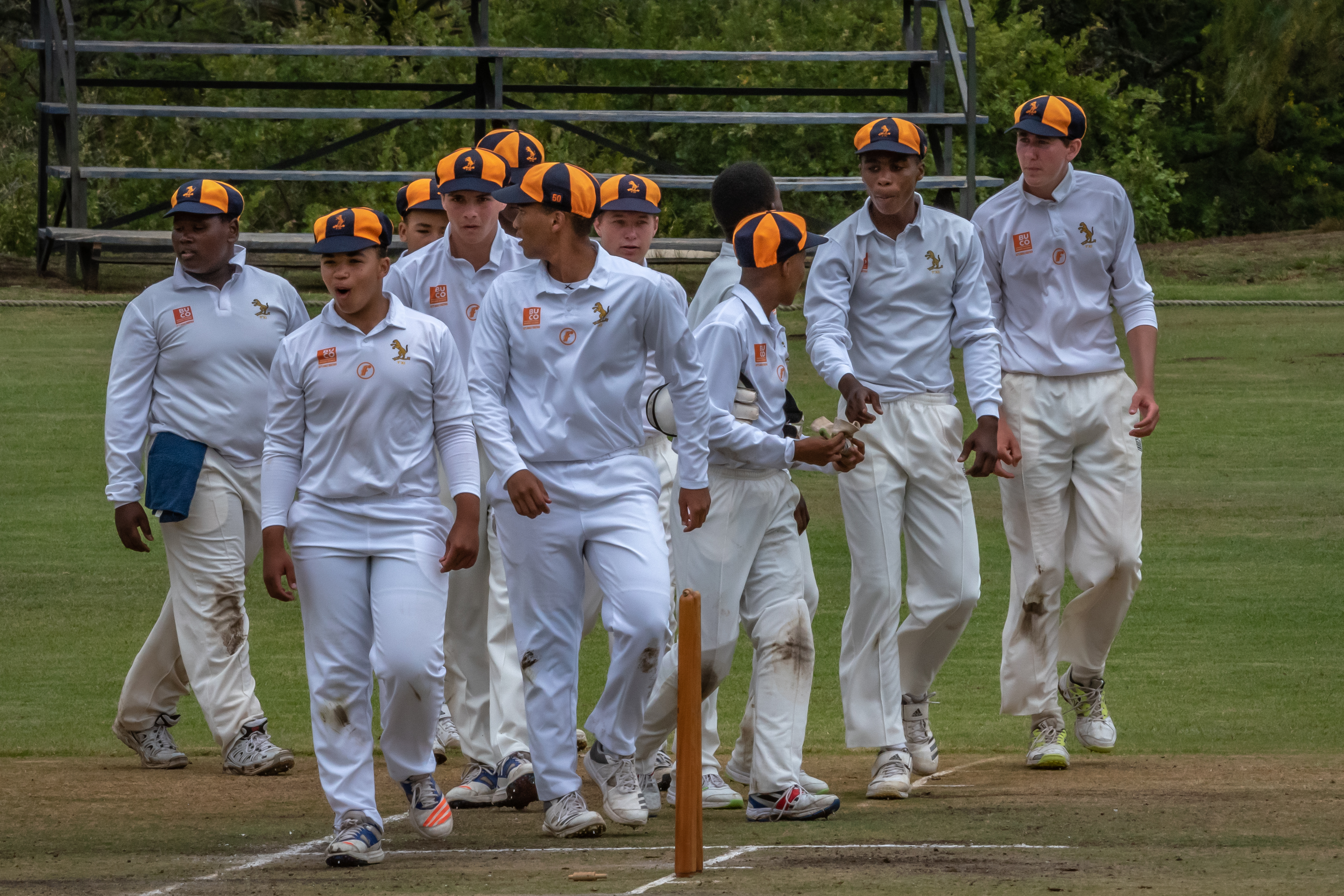 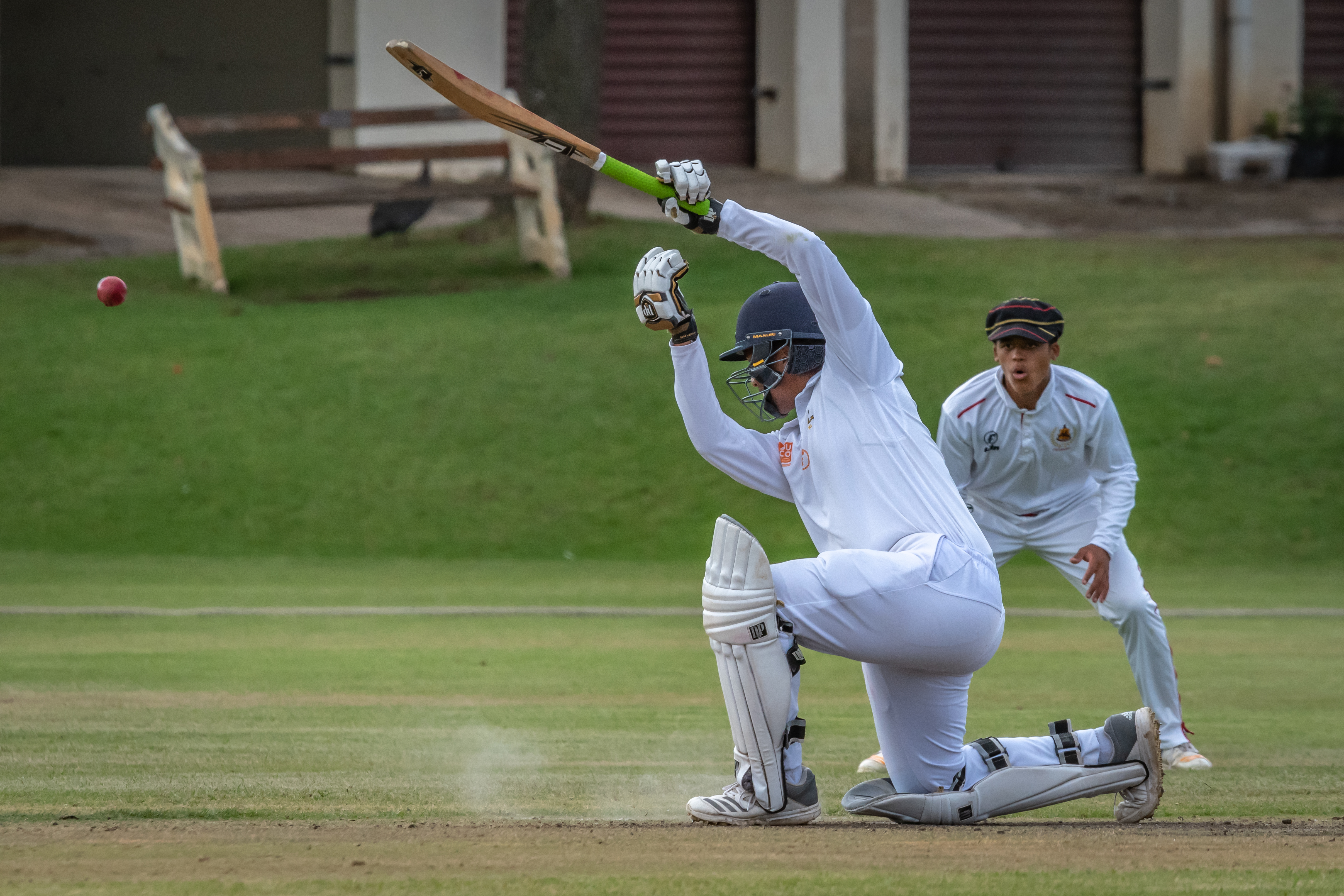 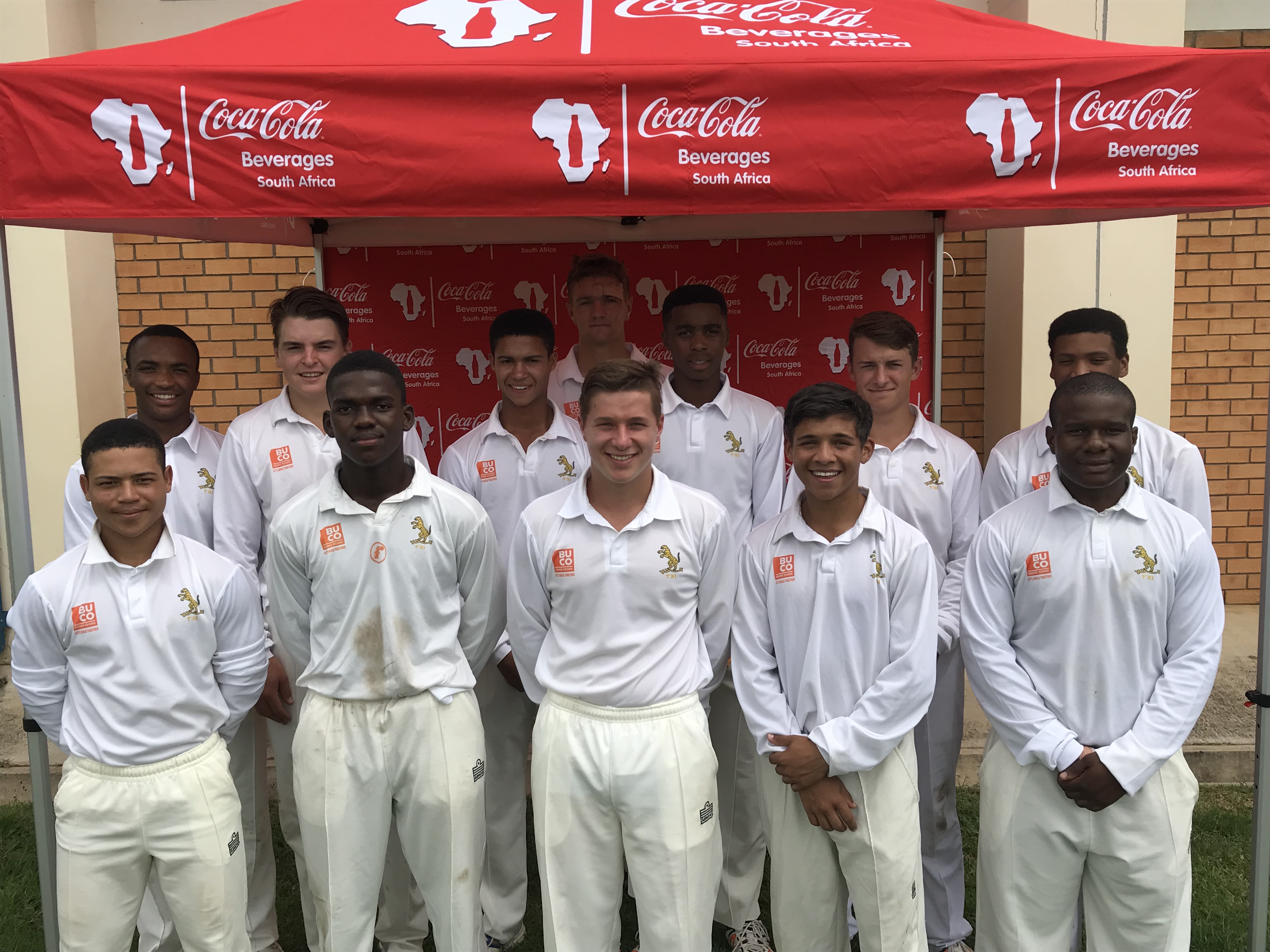 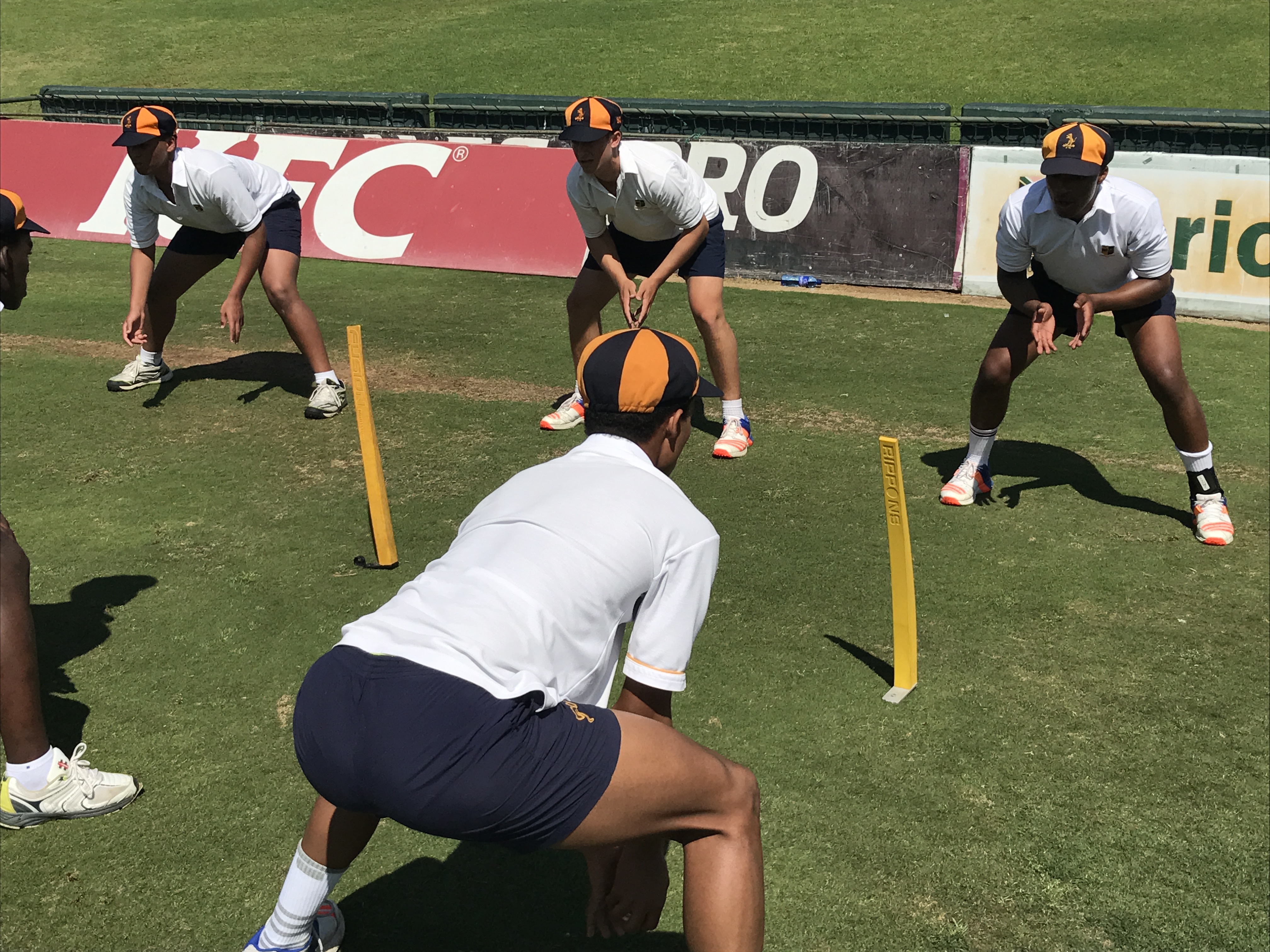 Our role locally and nationally is obvious to recognise. In the past year, within the  Senior school alone, Graeme College had nine players receive their provincial colours. This is an unbelievable achievement and speaks volumes about the culture of cricket at Graeme presently. A further twelve Junior School cricketers were selected into provincial and regional teams, meaning a total of 21 players across the school represented their province in 2019. That means there are exciting times ahead for Graeme College; especially with regards to our u11 age group who ended unbeaten in 2019 and having four players in the EP u11A side. Graeme College is probably better known in the modern era due to the success of Kelly (OG 2008) and Jon Jon Smuts (OG 2006). Both are currently playing first class cricket for the Warriors and obviously Jon Jon has also been selected into the South African T20 and ODI sides. They were the last players to represent SA at the u19 level when both brothers were selected in 2008. There is just a feeling that the new group of Graemians are ready to break through.

CSA came on board in 2017, which coincided with one of the schools strongest ever 1st XI squads. That squad went on to have a win/ draw ratio of 98% in 2018 and ended with the team winning the local Shaw/ Brown T20 trophy against our neighbours Kingswood and St Andrews for the first time. Mark Amm captained the 1st XI in 2017 and 2018 and has since gone on to be a key member of the NMU 1st XI in his first year at university. Amm was a match winner with bat and ball, picking up more than 100 wickets and scoring more than 2000 runs for the Graeme 1st XI. The tall off-spinner has enormous potential and will no doubt be knocking on the door for higher honours very soon. Chris Gleaves (OG 2018) joined the Titans Academy for 2019 and 2020, and is joined up north by Sihle Mginywa (OG 2018) this year as well. Bavu Manyakanyaka (OG 2018, EP u19) and Liam Agnew (OG 2018) have also gone on to represent the NMU 1st XI along with Keenan Viera (OG 2015). Amm and Manyakanyaka were joined in the EP u19 team by Siphesihle Madlongolwana in 2018 and was also selected into the team for the second year in 2019. Madlongolwana was also selected into the Warrior’s Cubs side in both years, and joined Amm as a recipient of the College’s Honours Award. The incredible left arm seamer went on to break the all time Graeme College wicket taking record, sneaking past Peter Emslie (who captained the South African u19 side in 1986 - who took 143 wickets at 17.6). Madlongolwana will join the EP Academy and study at NMU in 2020. Sonwabile Tshona (the 2020 1st XI Captain) was selected into the EP u19 and Warriors Cubs team in 2019 as well. Garwin Dampies showed his incredible ability after scoring a century against both neighbours in Grahamstown, in two consecutive days. Dampies was selected into the EP u17 side in 2019. Three different players scored centuries for the 1st XI in 2019, which is unique in itself at schoolboy level. Graeme have also boasted one of the countries best new ball attacked for the last two years, as Madlongolwana teamed up with Mginywa and then the 1st XI captain in 2019, Lakhanya Sam (who also scored a century for the 1st XI). The 2020 season is a rebuilding year, with an inexperienced squad, but it is a squad with very exciting potential to do brilliantly in the next few years.

One of the strengths of the Graeme College setup has been the appointment of quality teaching staff, who have thrived in both the cricket and boarding environments, as well as within the classroom. Bongo Draai was appointed as the coach of EP u17 Rural team, and also represented the EP mens CD team. He was featured in the first issue of the CSA Newsletter while starting off as an Intern before getting appointed as an educator once he completed his degree. 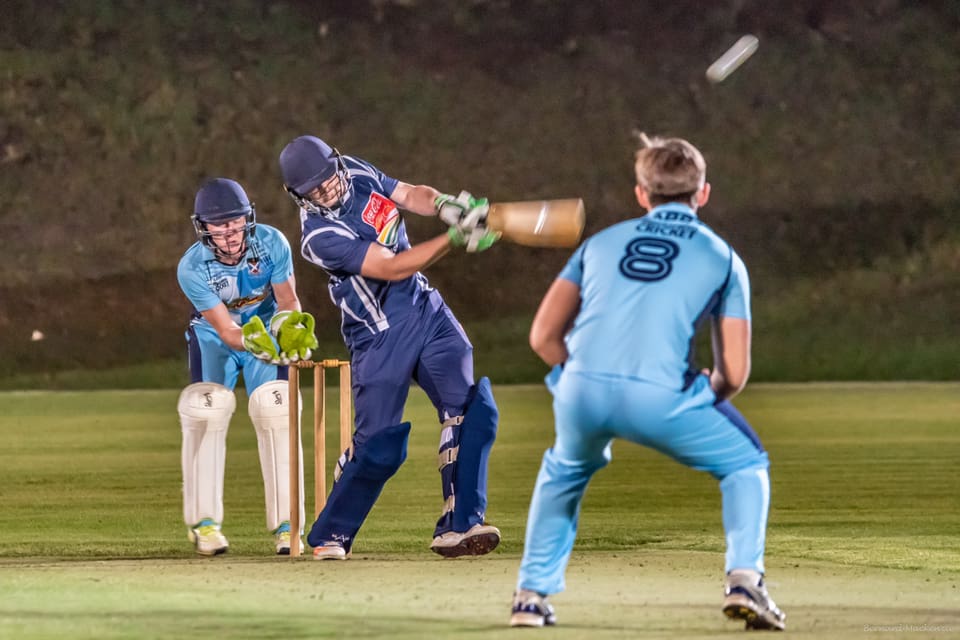 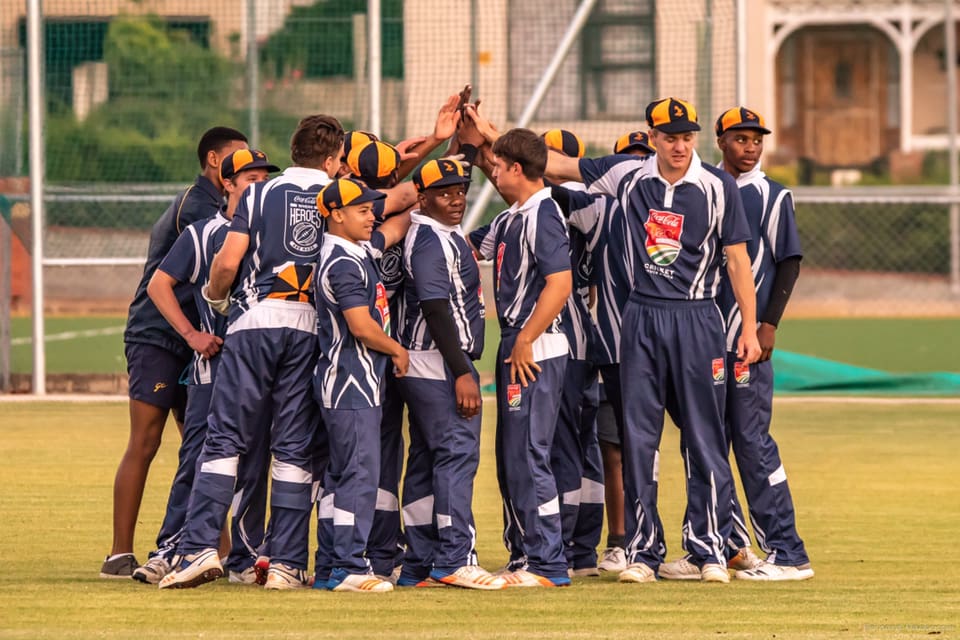 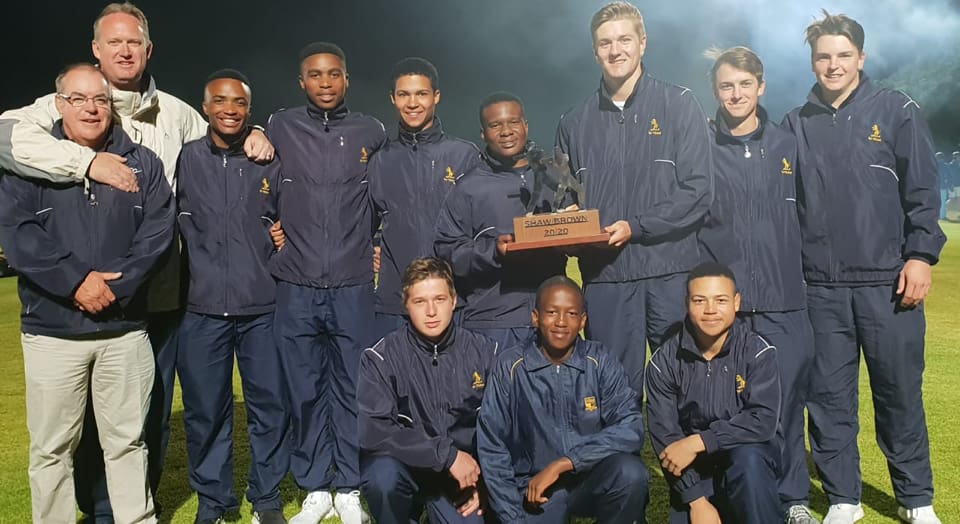 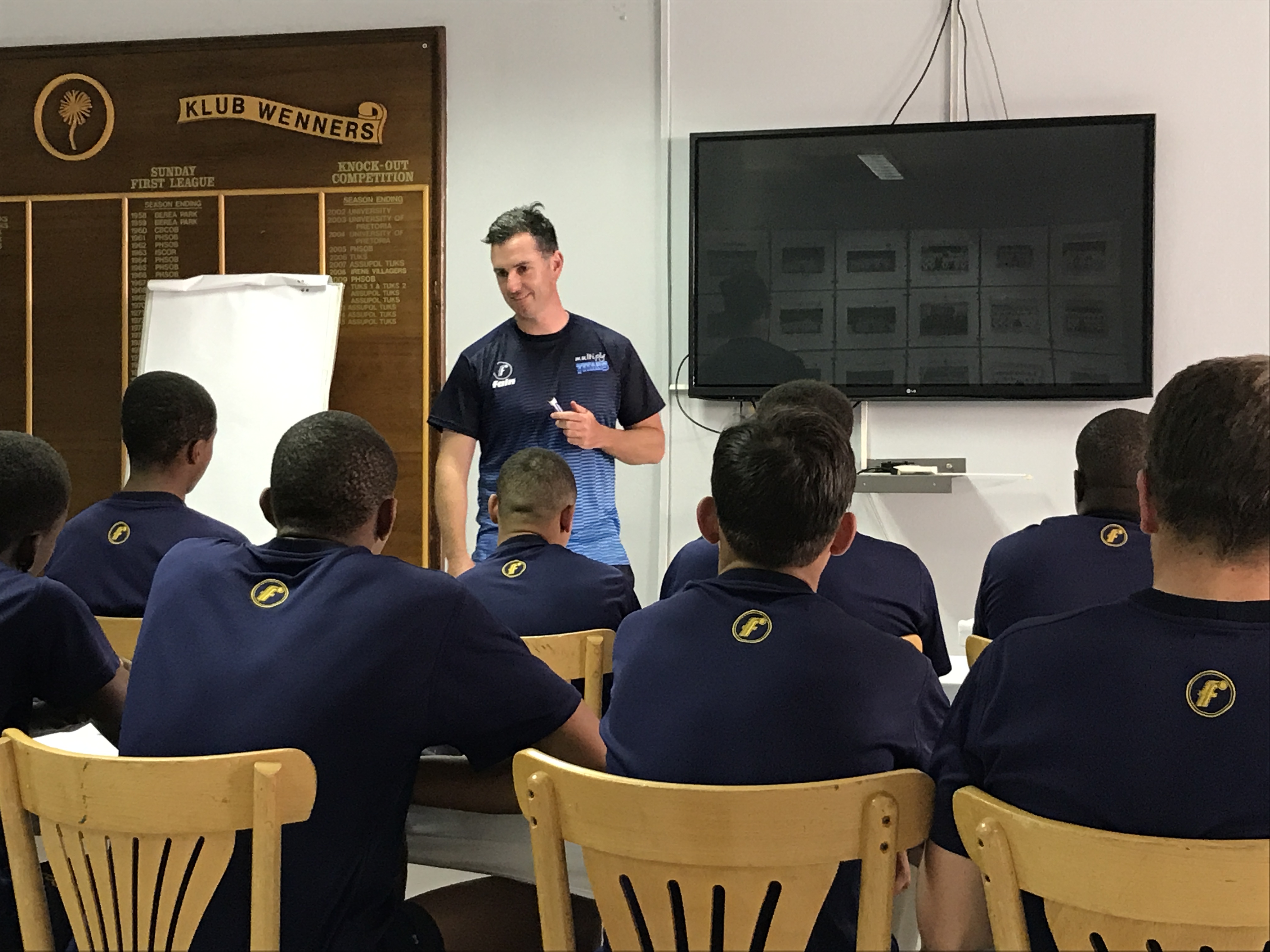 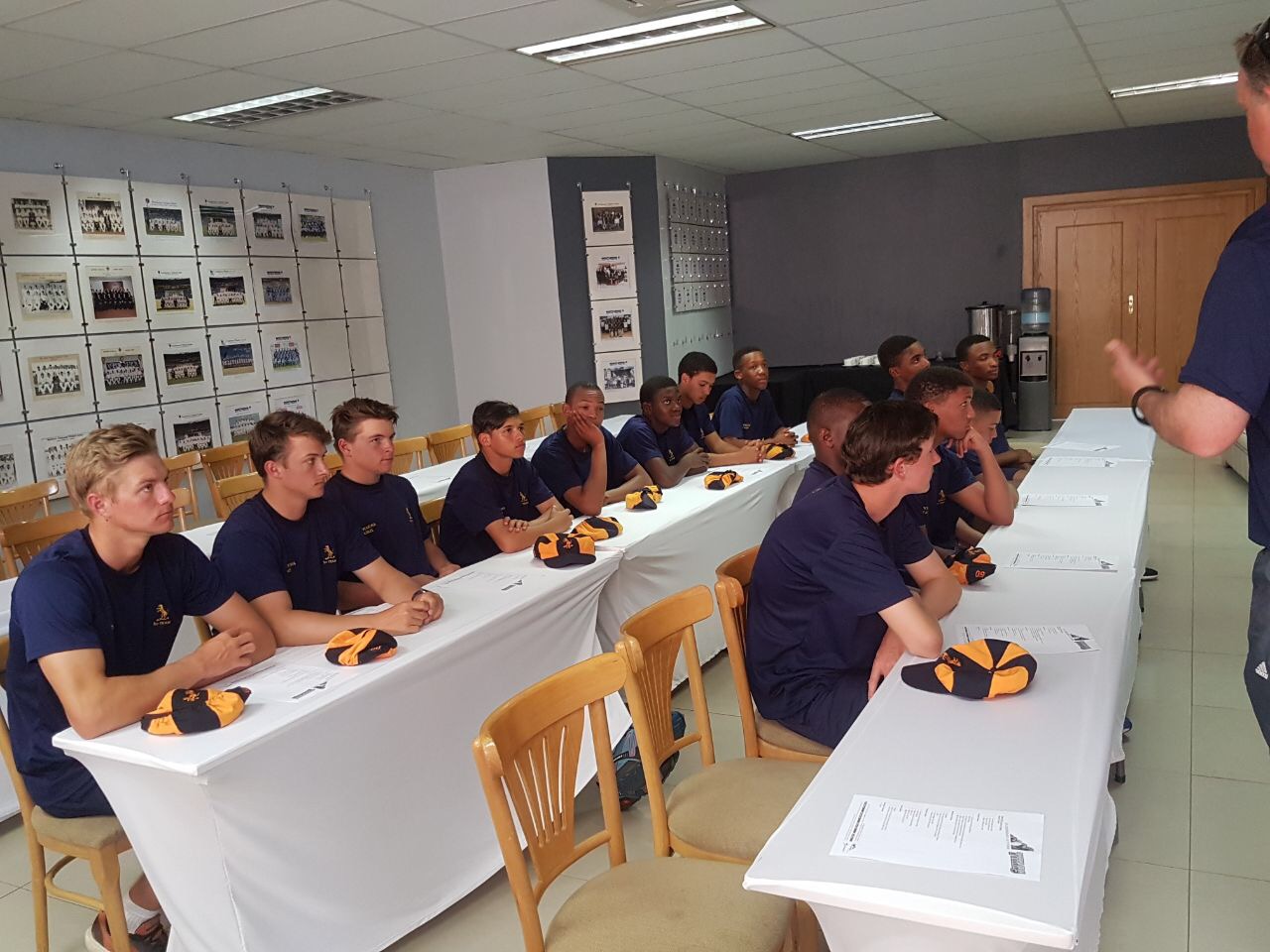 Mr Odwa Xonxa (OG 2014) played EP u19 cricket and represented the NMU 1st XI, was also appointed as an educator in 2019.  He has since been appointed as the assistant coach of the EP u17 team. Mr Siya Ntshona, another fine product of the Fort Hare Academy and EP u19 cricketer is just another one of the incredible coaching staff at Graeme. They joined Jonty van der Meulen (OG 2008) on the Graeme staff, who is yet another old boy who also played provincial u19 cricket. Add their contribution to the likes of Wayne Wibin (OG 1987), who as a parent, assists with the coaching in the Junior School - it is easy to see why Graeme College is doing so well. Wayne was a prolific first class cricketer who also coached the Border Bears. The current 1st XI coach, van Molendorff, has also been part of the EP Schools system since 1999 as a coach, manager and convenor of selection.

As part of the team preparation in 2017, the 1st XI squad spent a week at the Titans Franchise headquarters, where they were exposed to an incredible experience put together for us by Mark Charlton, the High Performance Manager of Titan’s Cricket. That experience was possibly the catalyst with regards to the individual growth of players within the squad, culminating in three players being selected into the EP u19 side in 2018. 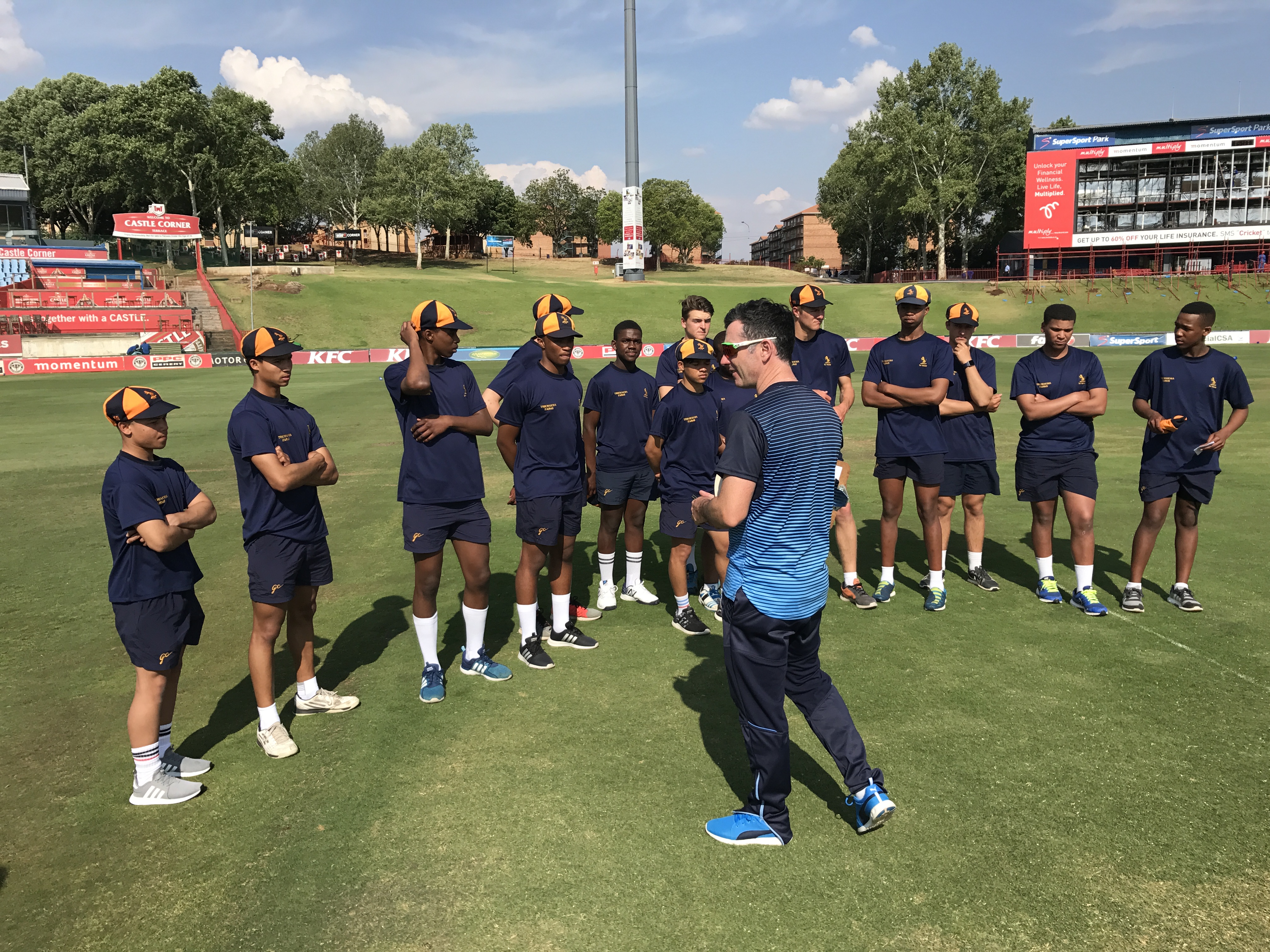 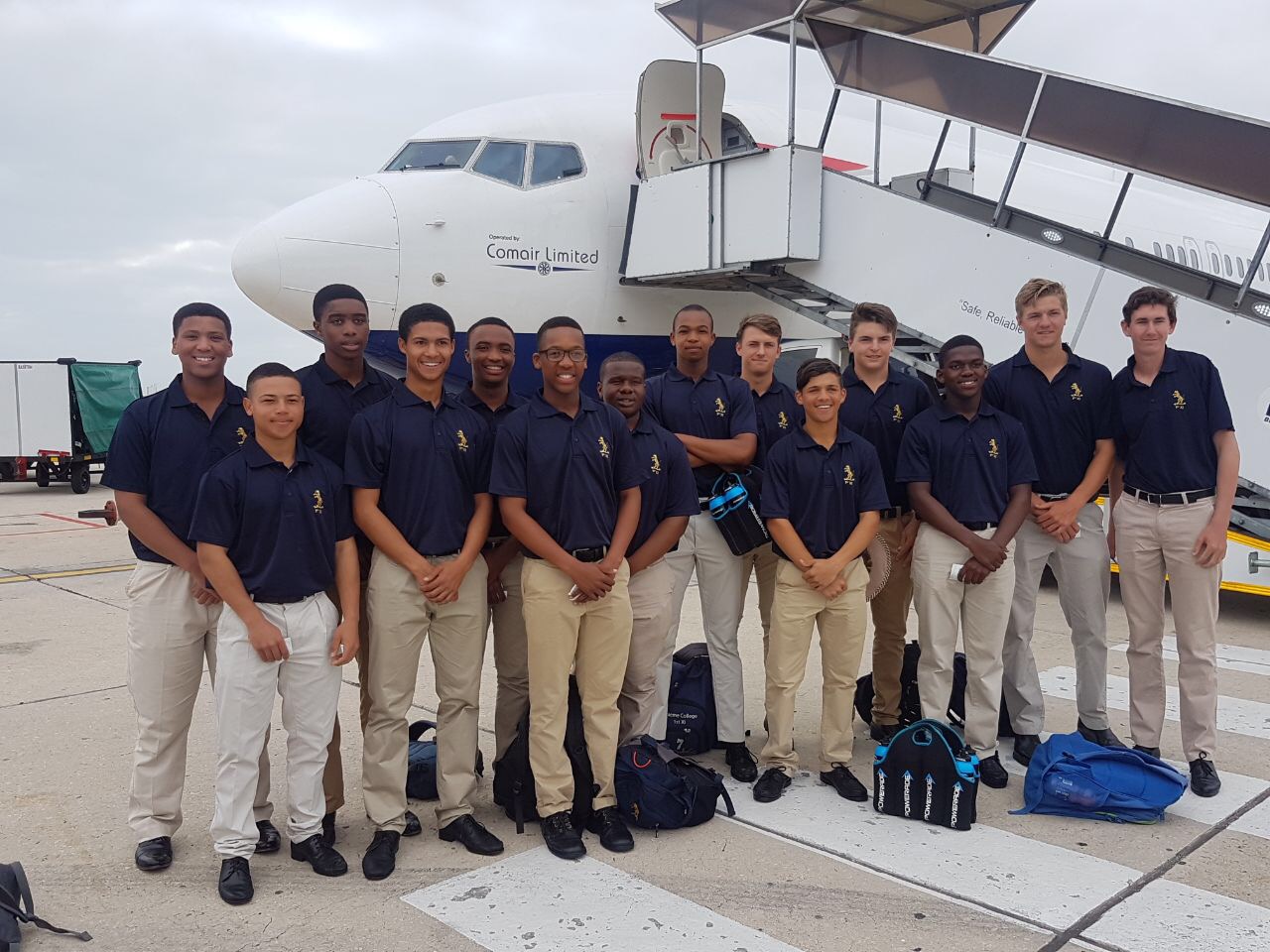 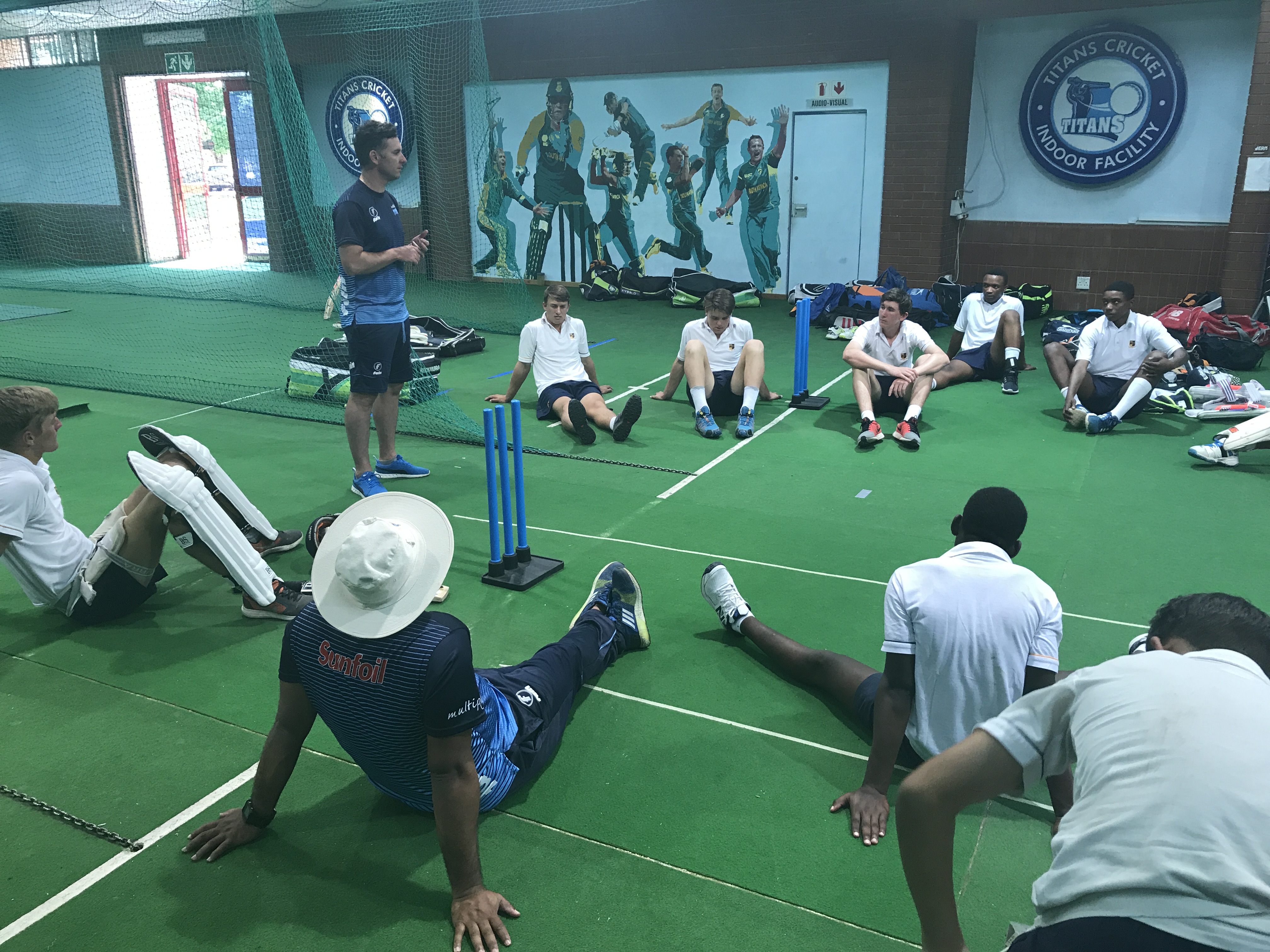 The facilities have never been as good at Graeme as they are now. Headmaster, Kevin Watson is a sports enthusiast and spends countless hours checking that facilities are of the highest calibre and in the best condition possible. In the end, he has made the most significant impact in the current cricket trend at Graeme College.

Ian Suttie is warmly regarded as an icon in South African school cricket. He retired in 2019, after 42 years of service at Graeme College. Many great players have been mentored by the educational legend. Gregg van Molendorff took over coaching of the 1st XI in 2017, and often regails stories of the respect and admiration he has for Ian Suttie and what he has contributed to both Graeme College and Eastern Province cricket over the decades. Despite being a small school of 350 learners, Graeme College punches far above its weight category against the toughest opposition in the province and South Africa. We have now developed such a strong cricket culture which has been inculcated over decades of proud tradition. Graeme College turns 150 years old in 2023, and one of the key focus areas within that milestone year, is to celebrate our growing cricket ethos. At the same time, I feel that our new cricket journey has just started. 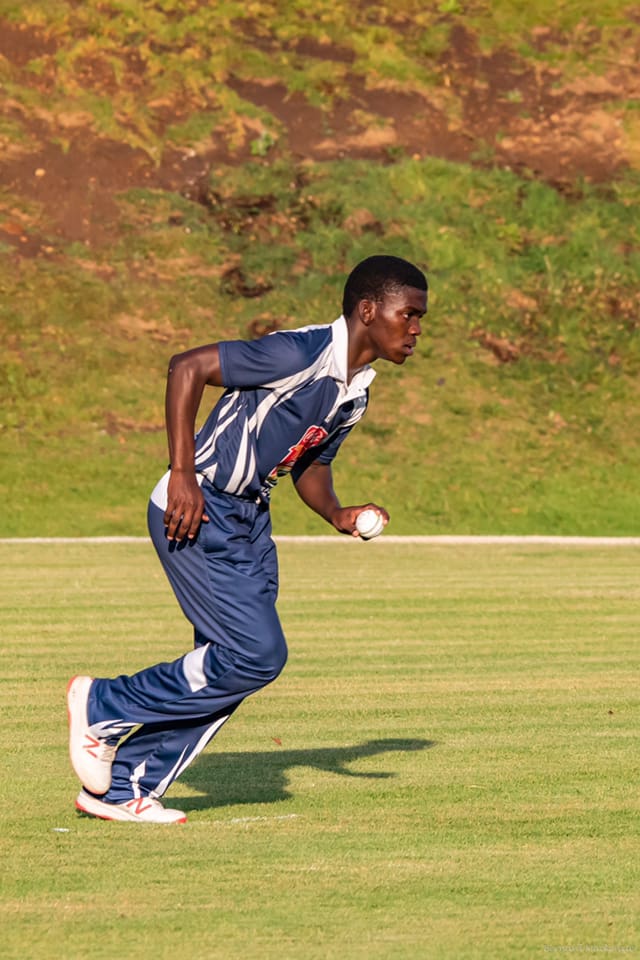 Siphesihle has been one of Graeme College’s gems. His ability to swing the new ball at pace, has meant that he has had great success against the very best teams and individuals in South Africa. Not many players can boast hs level of destructiveness with the new ball. Over the years he has also added a mean bouncer and slow ball to his repertoire. He has also developed his skills to be equally effective with the old ball, or at the death of a limited over contest. He would also no doubt mention he role as a batsman as he has also developed his all-round ability.